A proposed final scene for Avengers 4, which reunites Steve Rogers and Peggy Carter for one last dance, has made Marvel fans on the internet collectively weep. Read it here. 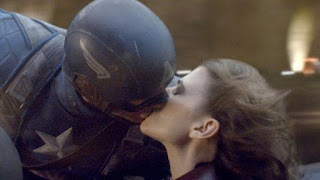 A Marvel fan’s idea for how Avengers 4 should end has lit up the internet, and perhaps also resulted in a few tears. A tweet by one person, in which they suggested a possible post-credits scene for the upcoming Marvel movie, has accumulated almost 100,000 likes in a just a few days.
In the tweet, the fan proposed that Avengers 4 should end with Captain America arriving in the afterlife - yes, this idea requires Steve Rogers to die - where he enters an empty dance hall, only to find the love of his life, Peggy Carter, waiting for him. “You’re late,” she says. 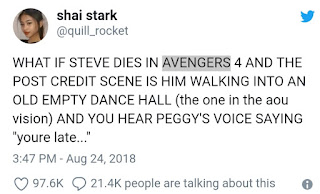 The idea takes off from Steve’s tragic romance with Peggy. At the end of Captain America: The First Avenger, Steve sacrifices himself to save the lives of millions. He deliberately crashes a plane that’s carrying bombs, but all the while he’s talking to Peggy on the radio. “This is my choice,” he says, as he puts her picture on the dials in front of him and plunges the plane down. “I’m going to need a raincheck on that dance,” he says, and she sets a date, with tears in her eyes, knowing that he’d never make it.
Aside from a brief meeting in Captain America: The Winter Soldier and a nightmare scene in Avengers: Age of Ultron (which once again brought up the unrealised dance), Peggy and Steve next meet as she is on her deathbed in Captain America: Civil War, after which a new romantic plot between Steve and Peggy’s niece was introduced and quickly abandoned.
While nothing is confirmed yet, it has been rumoured that Steve Rogers, along with many others, will die at the end of Avengers 4, the film that will essentially wipe the slate clean for a fresh phase of Marvel films. It has also been rumoured that Hayley Atwell, who plays Peggy Carter in the MCU, filmed scenes for the fourth Avengers film when pictures of hers wearing motion capture dots on her face were shared online.
Chris Evans’ contract with Marvel is said to be ending after Avengers 4, after which the actor will likely hand over the baton to a younger bunch of actors. In Avengers 4, the surviving superheroes will attempt to correct the events of Avengers: Infinity War, and save the ‘dead’ Avengers.
The film will also feature the heroes’ final stand against the villainous Thanos, and according to multiple reports will have a plot that includes time travel and alternate dimensions. Infinity War became the first MCU movie to cross $2 billion at the global box office, and Marvel has just one film to go (Captain Marvel) before fans get to witness the conclusive events of Avengers 4 next May.
at April 07, 2019